A mum has spoken of her heartache after all three of her children were born with the same rare genetic disorder. 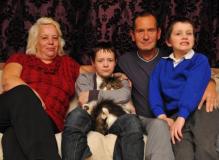 Karen Wilmore is trying to research the best treatment for her two sons, after her first son died as a result of Severe Combined Immune Deficiency (SCID).

The 42-year-old, from Buckskin, Basingstoke, has to take 11-year-old Sean and Ryan, 14, to Great Ormond Street Hospital every three weeks, where they are put on an intravenous drip for more than six hours to boost their immune systems.

Karen lost her first-born son, Tyler, in 1998, aged just 10 months, after giving him her own bone marrow in an attempt to help him.

She had no idea what was wrong with him at first, but took him to hospital because he kept being violently sick after feeding. He eventually died from internal bleeding following a liver biopsy.

Karen has since donated her bone marrow to Sean and Ryan.

Although both the transplants were a success, the boys still suffer from the condition, and are more prone to catching infections because their immune system is weak.

Karen said she is not happy with the treatment Sean and Ryan are receiving, and believes other countries, including Spain and America, have better treatment options.

She has spoken to a hospital in Madrid, and has been told that there could be an alternative treatment for her boys, so they do not have to be on medication for the rest of their lives.

She said: “I want them to have a normal life.”