Marta was born on a beautiful November’s day in 2003. I was a mom of a three-year-old girl already, who had made me discover how wonderful it was to be a mother at the age of 38. So much to make me want a second child. 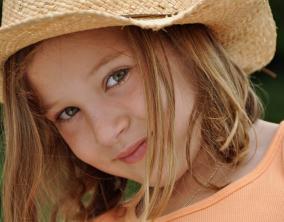 At Marta’s first cry, I felt I was the happiest mom in the world. She is a beautiful, healthy and frisky little girl, they tell me. But then, on the second day I am told she has a congenital heart disease: the Ebstein’s anomaly.
She get moved to intensive-care and there is probably going to be surgery. I am in despair. We get transferred to Padua, where the diagnosis in confirmed, but surgery is avoided. Marta can come home and live a “normal” life, with the exception that she needs periodic medical checkouts. At the time my thought was that Marta had already taken a lot and nothing else should have happened to her in the future.

I was wrong. On March 19th, 2004, three days after her first multiple vaccination, Marta starts having seizures and emitting strange noises. I was alone at home, serenely baking a pie for Dad’s Day, since he’d be back that same night from a work-trip to Rome and Laura was at the kindergarten. I panic. I think it’s some heart malfunction. I have never seen epileptic seizures before, so I don’t realize what is going on. At the hospital the situation becomes clear; I am shocked, although relieved because Marta has recovered. difficult and gloomy years follow. Seizures happen increasingly frequently. In the beginning it’s just febrile seizures that often require hospitalization and for two times, emergency room. Then the non-febrile seizures started and a much more serious problem began to appear. The family’s life orbits around Marta’s illness. Medical visits, hospitalizations and devastating seizures prevent us from living a normal life. Despite her problems, Marta goes to a daycare centre, and is constantly with her assistant teacher who supports her in psycho motor rehabilitation, which certainly is great deal of help for Marta.

It is only in 2010, through genetical analysis, that we get confirmation Marta has Dravet syndrome. To me that sounded like a life-sentence because, although I was well aware of the problems, I had always hoped we could solve them at some point. What is Dravet syndrome and why did Marta get it? I was hopeless and seeking answers. Through internet search, I found the Dravet syndrome family group. We were not alone, I told myself. I contacted the group representative and I finally saw hope for us. I found families with whom I could share our problems and our hopes for the future. I don’t personally know everyone, but I feel close to all of them because they can understand my pain and my hopes. Together we manage a fund-raising to guarantee a better future to our children through research. It is like climbing a mountain, but we pull each other up, so everything becomes easier. It makes me feel alive and committed to organize the cookies banquet we have every year to raise funds.

I sense I am really doing something for Marta and for all the other children that need our help. Today Marta is nine and she is at the third year in Elementary School, although not without difficulties. We are lucky because we found so much help and solidarity. Problems are many: seizures, orthopedic insoles, gymnastics, occupational therapy and support with her duties. But Marta’s progresses are a great reward for our efforts and sacrifices. And we take every day without seizures as a gift. Marta is a different girl when she doesn’t have seizures for some time. That is why I believe research can really help us, especially by providing better medicines. We went through a countless number of drugs and countless side effects! Our future is not easy and, as a mother, I am really concerned for my Marta.

But I want to be hopeful and wish I’ll be able to give her a good chance.