These are the heart-wrenching images of a toddler who suffers from a rare disease which has caused her head to inflate to three times the size of an average adult.

Young Dilla is fed by her mother Puspita. She is now unable to walk and talk due to pressure on the brain

Dilla Anargia Adilla, 3, was born with Hydrocephalus – a rare condition that blocks the flow of spinal fluid through the brain.

The excess fluid has collected in her skull causing her head to grow at an alarming rate. When she was born her head was a little larger than average, now it measures a whopping 100cm from ear to ear.

The debilitating condition has left the brave toddler, who had been able to say a few basic words, unable to walk or talk. She also suffers from blurred vision and stiff lower limbs and is cared for by her father Azwar Anas, 31, mother Puspita, 28, and sister Fazira, 7, at their home in Bogor, Indonesia.

The condition used to be described as ‘water on the brain’, although more correctly it is caused by a build up of cerebrospinal fluid. It was probably caused as the result of an infection that Puspita developed during pregnancy.

The condition affects 1 in 500 babies and is treatable in the UK through a standard two-hour procedure. A neurosurgeon implants a thin tube called a shunt, which drains the fluid through to the abdomen, where it is absorbed into the blood stream.

However, Mr Anas only earns 20 thousand rupiah a day as a driver – which is equivalent to just £1.36. It would cost him two months salary to cover the medical costs. 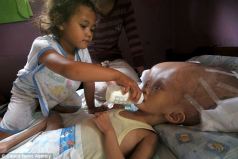 Dilla is fed by her sister Fazira. Dilla suffered from hydrocephalus from birth

Doctors in Indonesia are now reluctant to carry out the operation due to the severity of Dilla’s condition and her parents are praying for a miracle.

It is likely that Dilla has developed brain damage due to the delay in treatment.

Mrs Anas said: ‘Ever since I was told by the doctors before her birth about her disabilities I have accepted it from the start.

‘But seeing Dilla in so much pain is obviously tearing me apart. It doesn’t just affect me, it upsets everybody when we see her in pain.

‘I don’t know whether she will survive this illness because she needs special and intensive care.

‘A doctor has told me that they can’t operate on Dilla because she is also getting weaker. I can only accept the gift that God has given to me and my husband.

‘I know that God sent Dilla to me to take care of her with all my heart.

‘We are not sure there’s going to be a miracle but we can only hope and the rest is up to God.’